Midnight Party with HARRY POTTER AND THE PRISONER OF THE AZKABAN

Something wicked this way comes… Attend Hogwarts School of Witchcraft and Wizardry (in the Music Box Lounge) and repel some Boggarts before our midnight presentation of Alfonso Cuarón's HARRY POTTER AND THE PRISONER OF THE AZKABAN! Following The Sorting Ceremony, compete for the House Cup in a challenging Marauder’s Map Trivia Tournament, become an Azkaban fugitive, and partake of Butterbeer and Divination. Hippogriffs and House Elfs are welcome.

The film will screen at Midnight each night.

Fri, Feb 3rd
Harry Potter and the Prisoner of Azkaban

Sat, Feb 4th
Harry Potter and the Prisoner of Azkaban

Harry Potter and the Prisoner of Azkaban 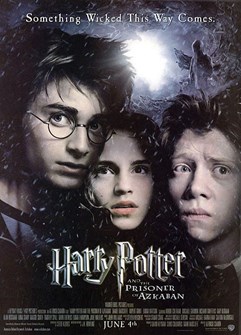 Harry, Ron and Hermione return for a third term at Hogwarts School of Witchcraft and Wizardry. But Harry's fate, and that of the entire community of wizards, looks bleak when the infamous Sirius Black--convicted of abetting evil Lord Voldemort--escapes from prison. The only clue to where Sirius is headed: The Azkaban guards heard Black muttering in his sleep "He's at Hogwarts." Now, even within the walls of his magical school, Harry may not be safe from a convicted killer.