Screening in the Music Box Garden | Extremely Limited Seating Available Summer is here and that means one thing: the return of our GARDEN MOVIES! This year we are bringing you a new and improved Garden Movie experience, with an extended space, a brand new projector and screen, and an improved audio system.

For the month of July, our Garden Movie programming will be split into themed weeks, with one movie playing Friday-Sunday and its thematic counterpart to play Monday-Thursday. Seating begins 25 minutes prior to showtime.

There are currently no Music Box Garden Movies scheduled

Lifelong friends Barb and Star embark on the adventure of a lifetime when they decide to leave their small Midwestern town for the first time ever.

Blood Feast + Scum of the Earth 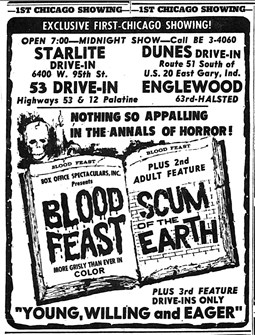 Windy City Double Feature Picture Show, hosted by film historians Adam Carston and Mike Vanderbilt, is a bi-weekly podcast that celebrates Chicago’s rich moviegoing past by exploring historic double features that once screened in The Loop’s bustling movie district, neighborhoods, drive-ins, or suburban theaters. Each episode the hosts take a deep dive into the movies and the glorious theaters that screened them, setting the time and the place by examining local news, national trends, popular culture, and what else was playing around town. It’s like a cinematic time machine!

This month, the hosts are bringing the show to the Music Box garden, taking everyone back to August 9, 1963, when cult favorites Blood Feast and Scum of the Earth—both directed by Chicago film maverick Herschell Gordon Lewis (The Godfather of Gore!)—opened at the Starlite Drive-In. Come for a unique screening experience, brimming with nostalgia and local history.