Silent Cinema at the Music Box

Rare and classic silent films, the way they were meant to be seen! Featuring live musical accompaniment on the famous Music Box organ by Dennis Scott, Music Box House Organist.

Movies & Showtimes for
Silent Cinema at the Music Box 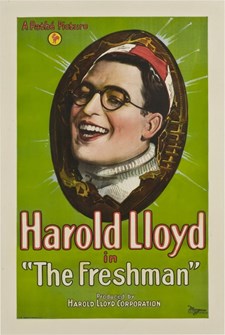 One of the most financially successful pictures of the silent era, The Freshman was, in some ways, an unlikely smash. Although Harold Lloyd was silent comedy’s undisputed box office champion, he had recently cultivated a reputation for death-defying stunts and meticulous chases in films such as Safety Last and Girl Shy. Bereft of daredevil thrills, The Freshman hinges entirely on Lloyd’s homedown charm, an island of wholesome earnestness in a sea of Prohibition-era cynicism. He plays Harold Lamb, a mild-mannered freshman at Tate College who aspires to be Big Man on Campus, but whose only knowledge of college customs comes from the movies. (Though The Freshman was scarcely the first of its genre, more people bought tickets to it than had likely ever stepped foot on a college campus, setting off a wave of student comedy imitators and rip-offs from Buster Keaton to Adam Sandler.) Lamb’s quest to win the girl (Jobyna Ralston) and achieve pigskin glory provide a loose structure upon which Lloyd hangs a series of riotous set pieces, culminating in The Big Game where nothing goes right. Don’t worry—no prior knowledge of football or any other sports is required to enjoy Lloyd’s exquisitely choreographed hijinks. (KW)