The Toshiaki Toyoda’s Uprising 2021 in Chicago

Movies & Showtimes for
The Toshiaki Toyoda’s Uprising 2021 in Chicago

The Toshiaki Toyoda’s Uprising 2021 in Chicago 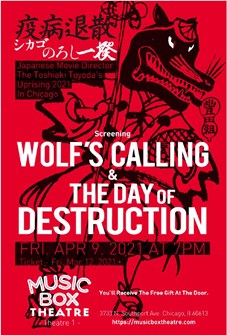 A girl finds an old handgun in her attic and the symbolic object conjures a mystical scene of samurai (a stellar cast of actors joined by the 20-person Edo punk band Seppuku Pistols, who also provide the soundtrack) gathering within the moss-grown location of Kasosan Shrine in Tochigi Prefecture. Director’s note: “Turn up the volume!”

Seven years ago, a mysterious monster was found deep in a rural coal mine. Since then, rumors of a plague spread through the small town, and people experience an unexplainable mental illness. A young Shugendo practitioner goes missing only to resurface transformed, intent on exorcising the world from the monsters haunting it.