Join us for a reminder that things do indeed go bump in the night with a selection of classic films from Universal Studio’s golden age of Horror in the 1930’s. The Music Box Theatre and DePaul University’s School of Cinematic Arts are partnering to resurrect some of the most iconic monsters, murderers, and madmen ever captured on 35mm.This series will celebrate the haunting legacy of DRACULA, THE MUMMY, THE INVISIBLE MAN and MURDERS IN THE RUE MORGUE in establishing the horror genre as a site for powerful philosophical, political, and cultural discussions about the terrors lurking in the pitch black shadows of our imagination. Prepare yourself for a journey into the gothic darkness and macabre seduction of undead artistocrats, megalomaniac scientists, and the birth of Modern Horror Cinema.

Featuring introductions by DePaul faculty and post-screening discussions in the Music Box Lounge & Garden for audience members. This series is sponsored by DePaul University College of Computing and Digital Media, School of the Cinematic Arts. 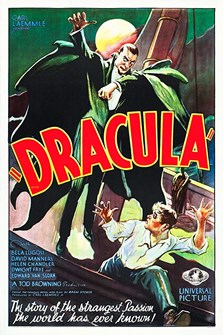 "I never drink ... wine." This grand, cobweb-infested monument changed the face of Hollywood horror, imbuing the genre with hazy sensuality, mittel European mysticism, and a cadre of armadillos. (Rats were judged too unseemly, even for a vampire's castle.) Bela Lugosi's perfectly-enunciated performance as Count Dracula set the standard for the character and doomed the Hungarian tragedian to a lifetime of typecasting. Vampires drink blood, but poor Dwight Frye chews the scenery magnificently as Renfield. 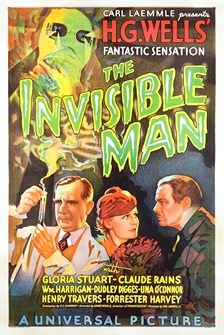 "An invisible man can rule the world. Nobody will see him come, nobody will see him go. He can hear every secret. He can rob, and wreck, and kill!" Claude Rains makes a supremely self-effacing Hollywood debut, mostly either covered in bandages or as a disembodied voice in the ether, in this pioneering blend of special effects extravaganza, social comedy, and fascistic horror. Though nominally drawn from H.G. Wells, the eccentric Englishness and the handsome craft are thoroughly the work of James Whale. 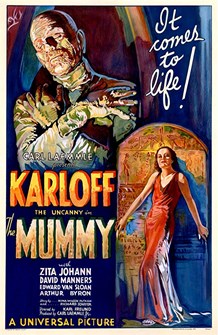 With the stellar box office returns from DRACULA and FRANKENSTEIN, Universal tried (and not for the last time, either) to create a horror franchise from scratch. Mixing the newfound stardom of Boris Karloff, the undead appeal of the still-potent Tutankhamen craze, and a century-spanning romance, cinematographer-turned-director Karl Freund crafted the most poetic film in the Universal cabinet of curiosities. The central tension of early horror films—that the monster is often a more attractive mate than the heroine's fidgety, stuffed-shirt fiancé—was never thrown into such stark relief.

Murders in the Rue Morgue 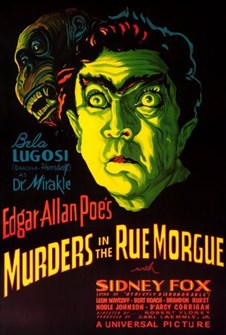 Loosely based on a story by Edgar Allen Poe, Murders in the Rue Morgue is among the most visually sophisticated and intellectually dubious films of Universal's horror cycle. Bela Lugosi stars as Dr. Mirakle, a sideshow spieler with a fanatical drive to demonstrate his idiosyncratic grasp of evolutionary biology by mixing the blood of hairy old gorillas and beautiful young women. Frenchman Robert Florey brings a continental sensibility to the material, lifting many ideas from European horror classics, particularly The Cabinet of Dr. Caligari.