***FREE ADMISSION for Music Box Members***
Sign up for a Membership HERE: http://bit.ly/2dSZAYJ

Originally released in 1987 at the height of Reagan-era policies concerning Central America, WALKER challenges the outrages of the ideological present with the absurdities of the historical past. Though attacked by many critics upon the film’s premiere as being “excessive” and “anarchic,” WALKER now stands as one of cinema’s most vibrant works of political satire. Featuring a script by Rudy Wurlitzer (PAT GARRETT AND BILLY THE KID), a haunting score by The Clash’s Joe Strummer, and a wild-eyed central performance from Ed Harris, WALKER is a surreal, darkly comic journey into the twisted heart of American imperialism and political celebrity. Join maverick director Alex Cox for a rare 35 mm screening and on-stage conversation of a film as relevant now as ever before.

Alex Cox was born outside Liverpool, in 1954. Studied at Oxford, Bristol, and UCLA. Director and writer of various films, including REPO MAN, STRAIGHT TO HELL, and TOMBSTONE RASHOMON. Honorary citizen of Tucson, AZ. 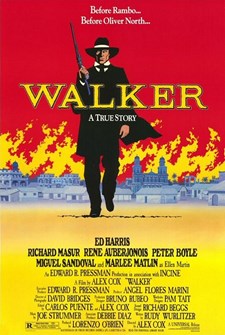 A neo-Western biopic about William Walker, an American mercenary who made himself president of Nicaragua in 1856. Walker is almost unknown today but at the time he was wildly popular, and U.S. newspapers wrote about him more than they did about the sitting U.S. presidents during that period.