Withnail And I with Richard E. Grant in person!

Co-presented by The Lyric Opera of Chicago

TV and film star Richard E. Grant (LOGAN, JACKIE, GIRLS, GAME OF THRONES) visits the Music Box Theatre for a special one-night-only 30th anniversary screening of the cult classic film WITHNAIL AND I, which launched Grant’s career in 1987. The British black comedy follows two unemployed young actors during what is supposed to be a relaxing getaway weekend to a country cottage. Immediately following the screening, Grant will participate in a Q&A with the audience about the film, his career and first time performing in Chicago for Lyric Opera’s My Fair Lady.

Richard E. Grant is currently in Chicago for Lyric Opera’s grand-scale company premiere of My Fair Lady, starring as Henry Higgins alongside Lisa O’Hare as Eliza Doolittle. My Fair Lady plays April 28-May 21, 2017, at Lyric’s Civic Opera House, 20 N. Wacker Drive. Tickets start at $22 and are available now at www.lyricopera.org/myfairlady or at 312-827-5600.

Movies & Showtimes for
Withnail And I with Richard E. Grant in person!

Mon, Apr 24th
Withnail and I 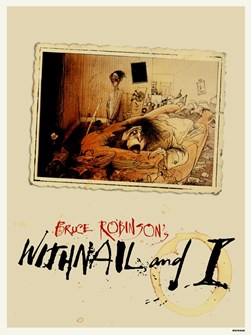 London, 1969 - two 'resting' (unemployed and unemployable) actors, Withnail and Marwood, fed up with damp, cold, piles of washing-up, mad drug dealers and psychotic Irishmen, decide to leave their squalid Camden flat for an idyllic holiday in the countryside, courtesy of Withnail's uncle Monty's country cottage. But when they get there, it rains non-stop, there's no food, and their basic survival skills turn out to be somewhat limited. Matters are not helped by the arrival of Uncle Monty, who shows an uncomfortably keen interest in Marwood...

The Night is Short, Walk on Girl
Part of: Music Box Garden Movies

Lydia Lunch: The War is Never Over