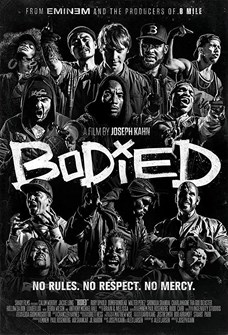 ***Director Joseph Kahn in person for a post-film Q&A***

A satire set in the world of competitive battle rap, BODIED is the story of Adam Merkin, a progressive grad student who becomes an accidental battle rapper after encountering Behn Grym, a respected icon in the merciless sub-culture of poetic personal insults. As Adam makes his politically-incorrect climb up the ranks, he risks alienating his father, a renowned writer and tenured professor at Adam's university, along with his skeptical girlfriend Maya, and all of his academic friends. His success breeds outrage however; Adam soon faces growing backlash on campus and the consequences of his controversial talent. BODIED explores the dangerous spaces of the world's most multicultural and artistically brutal sport.