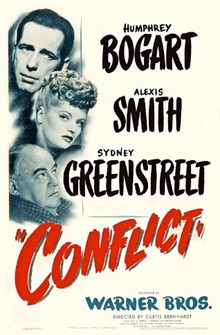 One of Humphrey Bogart's rarest films has the legendary actor as a scheming wife-killer (Rose Hobart stands in for Bogart's real-life ball-and-chain, Mayo Methot) playing cat-and-mouse with family friend Sidney Greenstreet—a psychiatrist with expertise in the criminal mind. It's fascinating to watch as, for the first-and-only time, Bogart and Greenstreet trade places as hero and villain. Shot in 1943, but not released until '45, this unjustly neglected gem predates several 1944 classics credited with starting the noir movement.