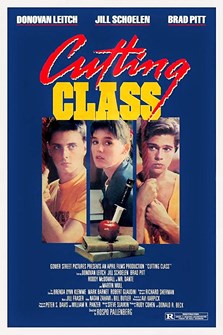 Paula’s (Jill Schoelen, POPCORN) high school experience couldn't be better. Between being class president and dating her school's star basketball player, Dwight (Brad Pitt, ONCE UPON A TIME IN HOLLYWOOD), she seems to have everything she could ask for. But when mentally disturbed teenage murderer Brian Wood (Donovan Leitch, THE BLOB) is released from an area asylum, it's not long before the body count begins. A distinctly camp slasher, CUTTING CLASS is a lavish, self-aware take on the genre's best-loved tropes. Starring Brad Pitt in his first feature film leading role, and featuring Roddy McDowall (FRIGHT NIGHT) and Martin Mull (ROSEANNE), CUTTING CLASS is newly restored in 4k from its original camera negative and in its uncut version, never before seen in the United States.