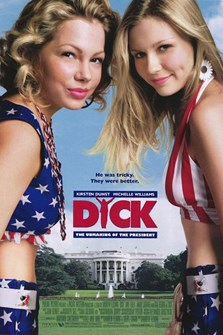 Since 1999, we’ve learned the true identity of Deep Throat and elected a president who makes Tricky Dick look like a mildly unscrupulous jaywalker by comparison, but DICK remains the definitive teen comedy farrago of the Nixon era. Peacenik high schoolers and Watergate residents Kirsten Dunst and Michelle Williams are history’s unknown agents, parlaying a White House dog-walking gig into a secret stint as Nixon’s most trusted advisors. Together they end the Vietnam War and bring down a presidency. With Dan Hedaya as Dick Nixon, Will Ferrell as Bob Woodward, Dave Foley as Bob Haldeman, and Harry Shearer as G. Gordon Liddy.

A recently released criminal is looking for a good time. He can forget his sins but he can never forget... Gwilliam.