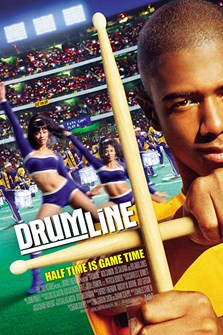 Presented by the Chicago Film Society

CLICK HERE for Tickets to DRUMLINE on Monday December 2nd

Nick Cannon stars as an incoming freshman and talented snare drum player at the fictional Atlanta A&T University, a place where the halftime shows far outshine the football. In a beautiful trifecta of egos, he’s also an incorrigible show-off who clashes with his controlling percussion leader (Leonard Roberts) and his band director (Orlando Jones), a man so dead set against modern music he counters their rival band’s au courant hip-hop compositions with “Flight of the Bumblebee.” DRUMLINE’s depiction of black college life is a rare and much-needed addition to Hollywood cinema, yet its most tremendous achievement may lie in its production: the competition scenes showcase some of the greatest real-life marching bands of the South, and they are beautifully shot, heart-pounding affairs, with the final showdown being well worth the price of admission.