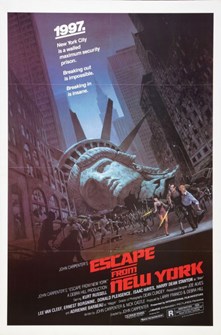 When the President crash lands on the island of Manhattan, now a maximum security prison, Snake Plissken is sent in to rescue him...or die trying. John Carpenter’s crafts a detailed, lived-in post-apocalyptic world, and inhabits it with memorable characters played by previous collaborator’s (THE FOG’s Adrienne Barbeau, HALLOWEEN’s Donald Pleasence), genre heavyweights (THE GOOD, THE BAD & THE UGLY’s Lee Van Cleef, SHAFT’s Isaac Hayes), and reinvents former Disney child star Kurt Russell as one of the ‘80s most badass action heroes. The result is a sci-fi action thriller where the rules are simple: Once you go in, you don’t come out.