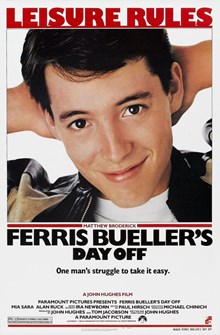 Wednesday, July 19th at Sunset | Admission is free | Screening at The Park at Wrigley

High school student Ferris Bueller wants a day off from school and he's developed an incredibly sophisticated plan to pull it off. He talks his friend Cameron into taking his father's prized Ferrari and with his girlfriend Sloane head into Chicago for the day. While they are taking in what the city has to offer school principal Ed Rooney is convinced that Ferris is, not for the first time, playing hooky for the day and is hell bent to catch him out. Ferris has anticipated that, much to Rooney's chagrin.

Come early and get a preview of Under the Gun Theater's current show "Save Ferris: The Unofficial Sequel to Ferris Bueller's Day Off" --30 years later, Ferris Bueller is still ducking responsibility and refusing to grow up. Divorced, broke, and estranged from his teenage daughter, Reagan, Ferris embarks on a desperate quest to repair their relationship by recreating his magical day off with her.