From Morn to Midnight

From Morn to Midnight 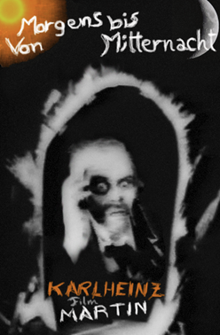 A bank clerk becomes beguiled with a mysterious woman and embezzles a large sum from his firm in hopes of sloughing off the oppressive stability of his bourgeois lifestyle. When the woman rejects his entreaties, the clerk descends through the hellhole of modern urban life.  This stark adaptation of Georg Kaiser’s Expressionist play was brought to the screen under the supervision of noted theater director Karl Heinz Martin. If anything, FROM MORN TO MIDNIGHT makes THE CABINET OF DR. CALIGARI look like a bucolic Sunday afternoon stroll. The stylization of FROM MORN TO MIDNIGHT proved so radical—the sets are angular and monochromatic, the space is non-naturalistic, and even the light is painted on—that the film never received a German release.

35mm print courtesy of the National Film Archive of Japan