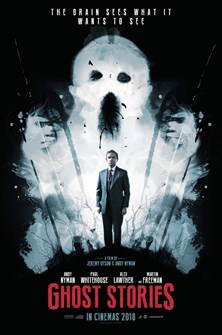 Experience three spine-tingling tales of terror to haunt your dreams. A debunker of all things paranormal, Professor Phillip Goodman (Andy Nyman) has devoted his life to exposing phony psychics and fraudulent supernatural shenanigans on his own television show. His skepticism is put to the test, however, when he receives a file of three chilling, inexplicable cases: a night watchman (Paul Whitehouse) haunted by disturbing visions as he patrols an abandoned asylum; an edgy young man (Black Mirror’s Alex Lawther) involved in a hellish car accident deep in the woods; and a wealthy former banker (Sherlock’s Martin Freeman) visited by the poltergeist spirit of his unborn child. Even scarier: each of the these macabre stories seems to have a sinister connection to Professor Goodman’s own life. Will they make a believer of him yet?

“A witty and well-crafted love letter to old-school horror tropes.” -- The Hollywood Reporter