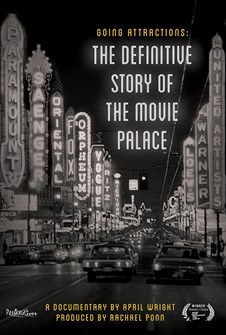 ***Director April Wright in Attendance for a Post-Film Q&A***

Other countries built palaces for royalty; in the United States we built them to watch movies. GOING ATTRACTIONS: The Definitive Story of Movie Palaces celebrates the grandeur of the great cinemas of the United States. Built in the 1910s-30s, when movies were the acme of entertainment and the stories were larger than life, so were the venues designed to show them: Thousands of seats, giant screens, exotic and ornate interiors with balconies and lounges, in-house organs and orchestras, amazing marquees, and air conditioning back when homes had none. The film also tracks the theaters' eventual decline, through to current-day preservation efforts. A tribute to America's great art form and the great monuments created for audiences to enjoy them in.