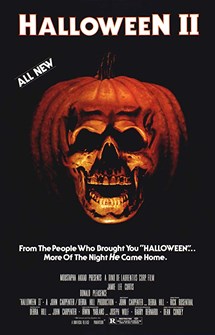 John Carpenter's Halloween scared the living daylights out of 25 million people and set a precedent in smashing box office records for a horror film. But the nightmare is just beginning...picking up moments before its predecessor ended, Halloween II follows the same ill-fated characters as they encounter The Shape in the forever-cursed Haddonfield. Myers is still very much alive and hungry for blood as he stalks the deserted halls of the hospital where his sister lays waiting. As he gets closer and closer to his terrified target, Dr. Loomis discovers the chilling mystery behind the crazed psychopath's savage actions. Written by horror masters John Carpenter and Debra Hill, Halloween II is an unfairly maligned (even by Carpenter himself) sequel that ratchets up the body count, the screams, the gore, and most importantly, the crazy-eyed-mania of genre legend, Donald Pleasance -- all while managing to be one of the leaner, meaner, and flat out horrifying entries in the canon.