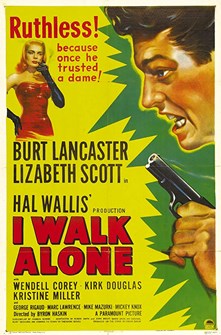 Burt Lancaster plays Prohibition era bootlegger Frankie Madison, who gets out of prison after 14 years to find his former partner "Dink" Turner (Kirk Douglas) has gone legit. Cloaked in the veneer of a respectable businessman, Turner has reaped the spoils of their once outlawed enterprise, and has no intention of sharing with his old-school cohort. Can torch singer Kay Lawrence (Lizabeth Scott) douse the flames of Frankie's retribution? A seminal postwar noir, long thought lost, revived in a new digital restoration.