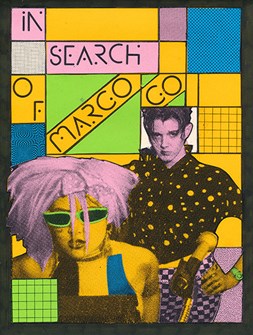 In 1994, Jill Reiter began a feature starring Kathleen Hanna, called IN SEARCH OF MARGO-GO. Her playful synth-punk romp re-envisioned NYC club culture as an acid-hued comic book, equal parts LIQUID SKY and THE CABINET OF DR. CALIGARI. Reiter, recently collaborated with animator Katie Bush to finish the film after two decades, and will be on hand to present the film, alongside her underground classic short films, FRENZY and BIRTHDAY PARTY.

Jill Reiter is a filmmaker whose super 8 and 16mm films captured an ephemeral time in 1990s queer underground subculture. They have shown at the New Museum, The Whitney, The Kitchen & at film festivals in the U.S. and Europe. As an excavationist & curator of visual detritus of the 20th century, she has created subterranean montages that can be seen in large-scale video projections at nightclubs such as SF drag institution Heklina's Oasis, & museums including SFMOMA & Yerba Buena Center for the Arts.

Co-presented by Dirty Looks -- an LA-based platform for queer film, video and performance.