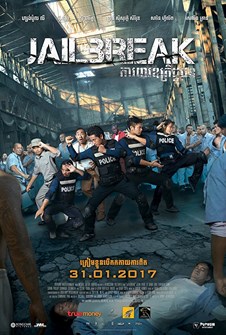 Sometimes all you need is a kick to the gut or a punch in the face to make you happy. Jailbreak marks an energetic action entry from Cambodia, helmed by a filmmaker who seems intent on giving his viewers a throwback to a time when action films were nothing but action. Using some very talented stuntpeople to populate the film as either police or inmates in this story of a massive prison riot and standoff, the brutality of the martial arts on display is breathtaking at times. This isn’t a pretty movie; it’s not slick or polished; it’s unfiltered, equal-opportunity ass kicking.

In Khmer, English, and French with English subtitles