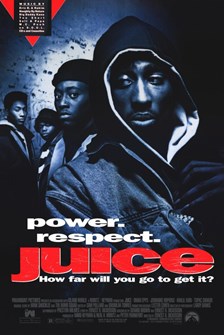 Director Ernest R. Dickerson in person for a post-film Q&A

After years of working as a celebrated cinematographer on such iconic films as John Sayles' THE BROTHER FROM ANOTHER PLANET and Spike Lee's DO THE RIGHT THING, Ernest Dickerson made his directorial debut with this story of four Harlem teens who plan a grocery store robbery to earn "the juice," or respect. But their pursuit of power and happiness takes an unexpected and dangerous turn. This landmark work for fans of hip-hop culture features early screen appearances by Tupac Shakur, Omar Epps, and Samuel L. Jackson.