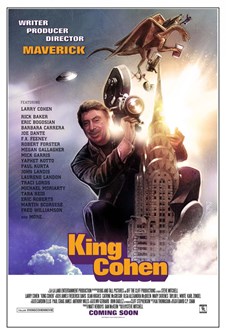 Indie film legend Larry Cohen has directed cult classics like Black Caesar, It's Alive, Q the Winged Serpent, and The Stuff. Hollywood screenwriter Larry Cohen delivered enjoyable "high concept" matinees like Best Seller, Phone Booth, and Cellular. And those are just the tip of the iceberg. Fans will savor every minute of this documentary as it covers Mr. Cohen's highly impressive career -- and newcomers will simply dig the classy old guy's attitude.

Larry Cohen is the sort of filmmaker who creates movie geeks. Upon discovering discover Black Caesar, It’s Alive, Q: The Winged Serpent, or The Stuff, you’re immediately tempted to see all of the director’s other movies. Between his directorial work and his (non-stop) screenplays, it’s safe to say you’ve seen and loved a few Larry Cohen movies without even knowing it. And this year, he’s here to hang out with the audience at Cinepocalypse and watch some movies!