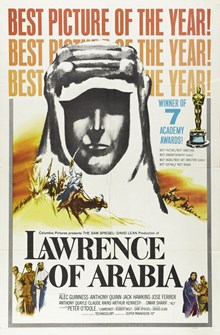 An account of the life and adventures of T.E. Lawrence (piercingly blue-eyed Peter O'Toole), David Lean's finest film is the rare historical epic that works on nearly every level, combining awe-inspiring production values with a genuinely moving story of a deeply imperfect man. Made by people who really mean business, the locations were so hot and dry that they caused cracking in the emulsion of the camera negative. Don't watch this one at home!