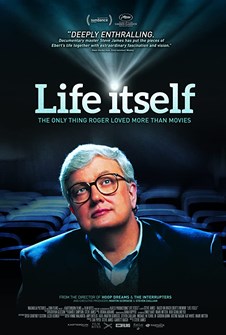 Acclaimed director Steve James (HOOP DREAMS) and executive producers Martin Scorsese (THE DEPARTED) and Steven Zaillian (MONEYBALL) present LIFE ITSELF, a documentary film that recounts the inspiring and entertaining life of world-renowned film critic and social commentator Roger Ebert – a story that is by turns personal, funny, painful, and transcendent. Based on his bestselling memoir of the same name, LIFE ITSELF, explores the legacy of Roger Ebert’s life, from his Pulitzer Prize-winning film criticism at the Chicago Sun-Times to becoming one of the most influential cultural voices in America.

“A THRILLING TALE WITH UNFORGETTABLE CHARACTERS. Ebert’s life contained as much melodrama, tragedy and uplift as any weepie movie he reviewed. Any biographical documentary demands onscreen star quality, and this one has a hero and a heroine worth rooting for.” – Time

“IF YOU AREN’T MOVED BY “LIFE ITSELF,” YOU OUGHT TO HAVE YOUR HEART EXAMINED.A soaring, delightfully entertaining testament to the power and poetry of words. And cinema. And love.” – Washington Post

“A work of deftness and delicacy, by turns a film about illness and death, about writing, about cinema AND, FINALLY, AND VERY MOVINGLY, A FILM ABOUT LOVE.” – Geoffrey O’Brien, New York Times