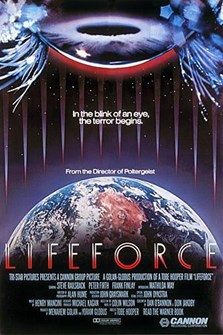 In a Tale of Halley's comet, there’s something wrong, something ancient, something hungry... Tobe Hooper (TEXAS CHAINSAW MASSACRE, POLTERGEIST) was given almost free reign and a huge budget by producers Cannon Film Group to make this adaptation of Colin Winston’s British science fiction horror novel “The Space Vampires.” With amazing special effects and a score by Henry Mancini, LIFEFORCE is a bewildering guilty pleasure, all the more pleasurable in this rare original 70mm print.