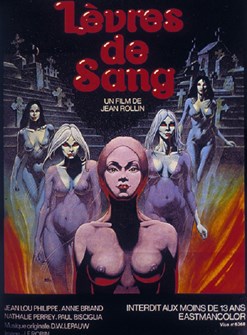 A mysterious photograph of ruins at a perfume launch party triggers an obsession with the strange, angelic girl in white, encountered one night while lost as a boy.  Melancholic, down-beat, and carried on the wings of vampires and serialized mystery films, LIPS OF BLOOD merges Rollin's love of the mystery serial with his signature melancholia and slow-burning visual poetics in this tale of romantic nostalgia and obsession with finding the truth, no matter how strange.  Aainst the conventions of logic, against family secrets, against the "normal", to find the answers in the ruins.  LIPS OF BLOOD blurs the line between the real and the imagined, both past and present.  Increasingly haunted by the ghostly apparition, beckoning him to the ruins, where one of Rollin's most fleshed-out works sees one if his most touching and poetic endings.  A true masterpiece of the "fantastique".