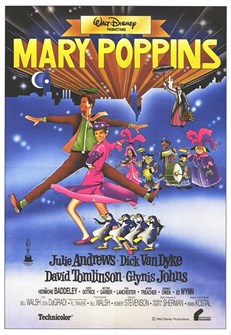 A Part of The Music Box 90th Anniversary

One of the most beloved programs at the Music Box, our interactive screenings let the audience joins in on the movie magic! Over the years, we’ve had packed houses playing along with presentations of WILLY WONKA AND THE CHOCOLATE FACTORY, GREASE, LABYRINTH, THE PRINCESS BRIDE, HOCUS POCUS, and our annual Thanksgiving shows of THE SOUND OF MUSIC.

For our 90th Anniversary, you’re invited to a movie that’s practically perfect in every way, with our MARY POPPINS SING-A-LONG. Put on your best cockney accent for the classic Disney musical, complete with onscreen lyrics. It’s guaranteed to bring out the kid in you!

About Music Box Sing-A-Longs
Long before sing-alongs circa 1983 Chicagoans enjoyed “community singing” wherein an organist led audiences reading lyrics on slides projected on the screen. The Music Box, however, was not among the 53 Chicago theaters that included this custom with their shows, according to a survey of trade journals (1925-1933) by music historian Esther Morgan-Ellis at the University of North Georgia. As early as 1918, Chicago Tribune amusements ads listed “community singing” elsewhere. The last one ran in 1970 when "The Boys in the Band" played at the Lincoln Village.
“During the 1920s most urban Americans participated in community singing at least once a week,” writes Morgan-Ellis. “So it is that many seek the moving picture theaters for the sake of being where others are, to overcome the sense of loneliness that is the cause of so much unhappiness in the teeming city,” observed the Christian Science Monitor in 1910. A month after the Music Box opened in August 1929, Tribune cartoonist Gaar Williams, who studied at the Art Institute, pictured a moviegoer in a third row aisle seat. This entry in Williams’ “Our Secret Ambition” series was captioned: “To break out with a swell tenor voice when the audience is requested to sing.”