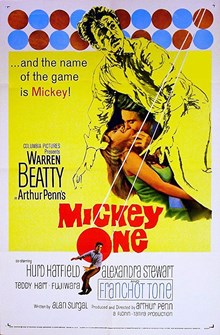 Two years before the release of Bonnie and Clyde, Arthur Penn directed this underseen French New Wave-esque, film noir-inspired, and jazz-fueled head trip shot on location on the streets of Detroit and Chicago. Warren Beatty flexes his beautiful muscles in a classic Beatty-role of a fast-talking narcissistic stand-up comic on the run from the mob. His fears of faceless pursuers launches him into a frightening and seemingly endless game of hide and seek filled with dead ends, sinister soup kitchens, and a monstrous Rube Goldberg contraption in front of Marina City that will spin your head. Don't try too hard to solve the riddles of this wacked-out urban odyssey lest they come after YOU next. Featuring a brilliant jazz score by composer Eddie Sauter and saxophonist Stan Getz.