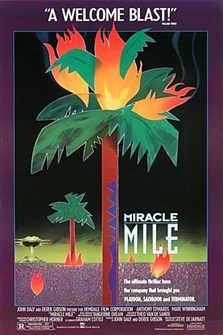 Harry (Anthony Edwards) and Julie (Mare Winningham) meet cute at the La Brea Tar Pits, liberate a tank of lobsters, and plan a date later that night. Alas, Harry oversleeps and misses their date, but arrives at Johnnie’s Coffee Shop just in time to pick up a ringing pay phone. Wrong number—a panicked man in a missile silo trying to warn his father of an imminent nuclear exchange. Now Harry has 70 minutes to find Julie, hire a freelance helicopter pilot, and escape to Antarctica. This propulsive, real-time journey through nocturnal Los Angeles glows like an atomic Lite-Brite and gambols to the ambient drone of Tangerine Dream. When MIRACLE MILE finally detonated in theaters in 1989 after a decade in development, it became the last fallout of Cold War cinema.