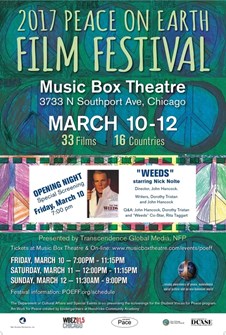 "When a bourgeois couple needs to park their expensive car in an Arab neighborhood of Brussels, an inevitable misunderstanding with the locals turns into a paralyzing panic." In Arabic and Dutch with subtitles

"A recording of a man's assault by a group of young men goes viral. Life through a lens proves to be far more engaging than the real thing; however, this expose' holds an interesting twist of consequence." In Modern Greek with subtitles

"An intimate look at the refugee crisis within the eyes of the bewildered children of Syria: one-third of the 1.5 million over the past year; 4.8 million overall since January 2015." In Arabic with subtitles

"Witness to Innocence, the largest organization of death row exonerees in the country, some having spent decades on death row for murders they didn't commit, come together once a year to share their thoughts and feelings, fears and dreams with the only people who really understand."

"Chicago-based The Peace Exchange sends students from violence-plagued neighborhoods traveled to South Africa in the summer of 2016, 22 years after the end of apartheid, to prepare them to become the Peace Builders needed back in their communities.

Q&A with Co-Directors Chad Rispalje and Jessica Work and The Peace Exchange Peace Builders & Staff following the conclusion of the last film.

Following the Q&A will be a presentation of the 2017 Peace On Earth Film Festival Community Action Award to The Peace Exchange.

The Community Action Award is presented to a Chicago Organization that is taking significant steps in its community to promote peace, nonviolence, understanding, tolerance and a greater awareness of issues facing the community and its residence.