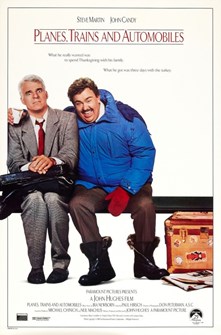 Steve Martin and John Candy are weary mismatched travelers trying to make their way to Chicago in time for Thanksgiving, by any means necessary. This screening includes a conversation between James Hughes, son of director John Hughes, and the film’s editor Paul Hirsch, whose filmography also includes FERRIS BUELLER’S DAY OFF, CARRIE and winning an Oscar for STAR WARS. Topics will include the film’s original ending, the 4-hour first cut, the improvisational interplay between Martin and Candy, and much more.

Copies of Paul's book "A Long Time Ago in a Cutting Room Far, Far Away" will be available for purchase at the screening, courtesy of Barbara's Bookstore