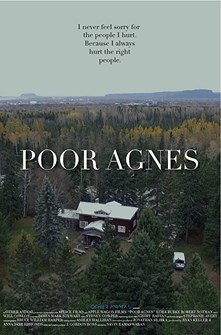 Genre audiences are so conditioned to seeing onscreen, male serial killers commit all manner of terrible acts on mostly female victims that we’ve grown numb to it. So what happens when the exact same acts of torture, degradation and murder are committed by a female killer upon a male victim? Does it make you feel ill at ease, and if so, why? These are among the many daring ideas that Poor Agnes asks viewers to contemplate while watching a powerhouse performance by lead actress Lora Bruke (as Agnes) as she puts a male captive through torment after torment. This one is destined to become a much-talked-about work of aggressively disturbing filmmaking.