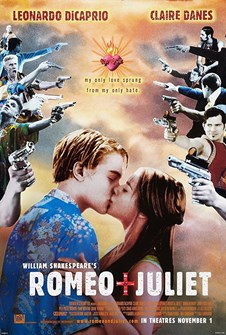 Baz Luhrmann helped adapt this classic Shakespearean romantic tragedy for the screen, updating the setting to a post-modern city named Verona Beach. In this version, the Capulets and the Montagues are two rival gangs. Juliet (Claire Danes) is attending a costume ball thrown by her parents. Her father Fulgencio Capulet (Paul Sorvino) has arranged her marriage to the boorish Paris (Paul Rudd) as part of a strategic investment plan. Romeo attends the masked ball and he and Juliet fall in love.