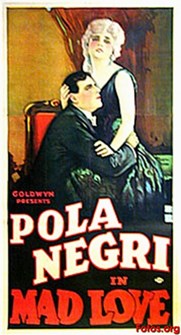 Fresh from the worldwide success of Ernst Lubitsch's Madame DuBarry, Polish actress Pola Negri signed a Hollywood contract with great fanfare. In March 1923, a month before the release of Negri's first American film, Goldwyn Studios dusted off a German Negri film from two years earlier, retitled it Mad Love, and cannily exploited the public's mounting Negri-mania. Described by the New York Tribune as "the greatest non-stop vamping record ever filmed," Sappho follows Negri as the titular temptress who drives one lover to the insane asylum (Alfred Abel), proceeds to seduce his brother (Johannes Riemann), beguiles an automobile magnate (Albert Steinrück), and more. A mad whirl of betrayal and revenge follows.