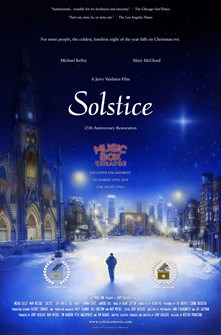 In 1993, filmmaker Jerry Vasilatos wrote, produced and directed the holiday drama SOLSTICE. Through some Christmas magic and a lot of good fortune, SOLSTICE was broadcast into millions of households as Lifetime Television's Original World Premiere Movie in 1994. Set in Chicago on Christmas Eve, the story centers on Nick Allman (Michael Kelley), a disillusioned young man who encounters a variety of characters that help him regain a sense of hope and optimism in the holiday season.

This special 25th Anniversary Director's Restoration was originally filmed in Chicago and features a sequence shot in the Music Box Theatre. Restored in 2K from original camera negative elements with a newly recorded orchestral score, SOLSTICE will be presented by the director and include a newly produced 10 minute featurette with interviews of original cast and crew members reflecting on the restoration and making of this perennial Christmas classic. A holiday sing-along led by Music Box house organist Dennis Scott will also accompany the show!

In conjunction with this Special Anniversary Screening, a Toys for Tots collection bin will be in the lobby from December 10th through December 18th. Please bring a gift for needy children!

"Sentimental... notable for its freshness and sincerity." - The Chicago Sun Times