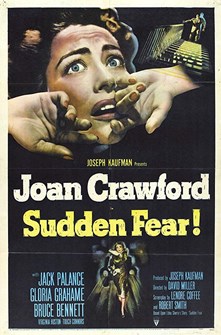 Joan Crawford gives an Oscar-nominated performance as a San Francisco playwright who marries a virile actor she’d rejected for one of her plays.  Little does she know that he plans to drop the final curtain on her.  Co-starring noir favorite Gloria Grahame as a scheming vixen, this stylish and suspenseful film is one of Crawford’s best.