Tammy and the T-Rex

Tammy and the T-Rex 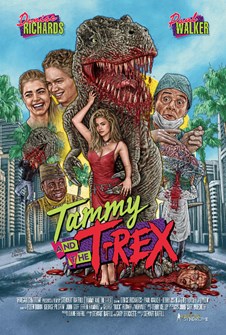 A tale of true love and sci-fi madness as old as time absurdly unfurls in your new, soon to be all-time-favorite, too-insane-to-exist film: TAMMY AND THE T-REX! An evil scientist implants the brain of Michael (a 21-year-old, babyfaced Paul Walker), a murdered high school student, into a robotic T-Rex, who swiftly escapes and goes on a wild mission to violently kill off his high school tormentors and reunite with his sweetheart, Tammy (Denise Richards). Playing like a ’90s Disney Channel movie—until the decapitations and head crushings begin.