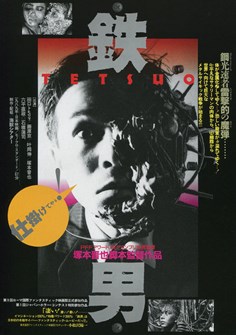 Man and machine feel the urge to merge in Tsukamoto’s utterly indescribable midnight movie madness, a body horror running-of-the-gauntlet which centers on an anonymous salaryman who begins to transform himself into a man of steel, his waking nightmare captured in twitchy camerawork and lurid, gritty black-and-white 16mm. A symphony of sex, steel, and scarification, set to a scraping industrial clangor. The kind of movie you wish you hadn’t watched stoned.