The Agony and the Ecstasy

The Agony and the Ecstasy

A FILM BY: Carol Reed
WRITTEN BY: Irving Stone (based on the novel: "The Agony and the Ecstasy" by), Philip Dunne (screen story and screenplay)
STARRING: Charlton Heston, Rex Harrison, Diane Cilento 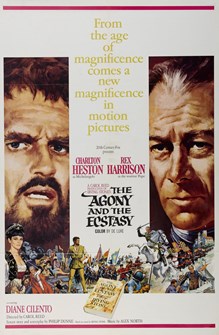 70mm with DTS Sound from Twentieth Century Fox
“We are harlots always peddling beauty at the doorsteps of the mighty.” How much verbal abuse did Charleton Heston have to take from Rex Harrison before the Sistine Chapel was finished? About 8 reels worth. Harrison is Pope Julius II, and Heston is Michelangelo in THE THIRD MAN director Carol Reed’s adaptation of the best-selling novel of the same name. With cinematography by Leon Shamroy (CLEOPATRA, PLANET OF THE APES), and music by Alex North (SPARTACUS).