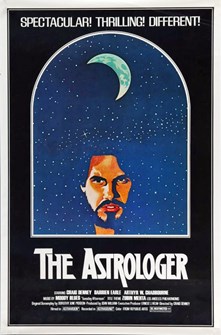 In an era where anyone with access to the internet can become a Wikipedia cinephile, THE ASTROLOGER remains something special. This rarely screened film is a fascinating passion project that combines carnie mysticism, international high adventure, and a Christ allegory for good measure. The film's director and star Craig Denney didn't secure the rights to the Moody Blues tunes that he used in the film, relegating THE ASTROLOGER to obscurity and ensuring that the film will most likely never receive an official release. However, thanks to the preservation efforts of the American Genre Film Archive, Music Box audiences can be among the lucky few to enjoy the adventures of astrologer/asshole Alexander with an eager midnight audience.

Presented by The Front Row