The A.V. Club Presents: Beyond the Room - Get Even

The A.V. Club Presents: Beyond the Room - Get Even 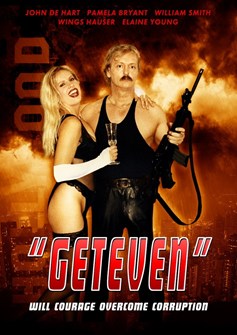 Tommy Wiseau and The Room have given us countless hours of joy over the years, but for the inaugural Cinepocalypse, The A.V. Club is opening the door and taking you “Beyond The Room” with a special presentation of Get Even, a.k.a. Road To Revenge, a.k.a. Champagne And Bullets.By day, John De Hart is a trial lawyer in Los Angeles. By night, he’s the writer, director, producer, composer, and star of this DIY action-romance opus. Shot mostly in 1993 and completed in 2007, Get Even features Satanic cults, corrupt cops, hot tubs, Shakespearean monologues, Wings Hauser laying down his personal philosophy while standing fully clothed in a swimming pool, and the life-changing magic of the “Shimmy Slide,” as performed by De Hart himself. Get Even has never received mainstream distribution and is only available from the director himself, so don’t miss your chance to see this cult-classic-in-the-making that will have you asking, “Who’s Hamlet? Who gives a shit?”