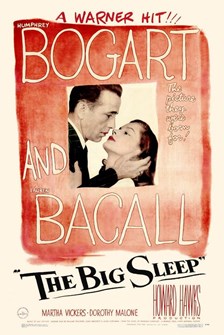 Without a doubt, one of the greatest PI noir films of all time, Howard Hawks' THE BIG SLEEP begins with Philip Marlowe (Bogart), a private dick hired by a wealthy family to deal with a blackmailer. But before Marlow can do his job, the blackmailer is dead and gangsters, chauffeurs, femme fatales, and henchman twist this narrative into a decidedly labyrinthine tale far more concerned with tone than plot, devoting ample focus to the inimitable magnetism between Bogie & Bacall, and the pull of Los Angeles' seedy underbelly.