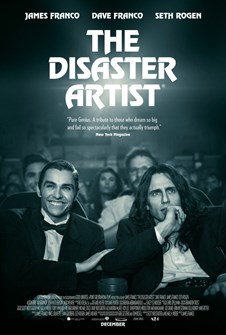 With THE DISASTER ARTIST, James Franco transforms the tragicomic true-story of aspiring filmmaker and infamous Hollywood outsider Tommy Wiseau — an artist whose passion was as sincere as his methods were questionable — into a celebration of friendship, artistic expression, and dreams pursued against insurmountable odds. Based on Greg Sestero’s best-selling tell-all about the making of Tommy’s cult-classic disasterpiece THE ROOM(“The Greatest Bad Movie Ever Made”), THE DISASTER ARTISTis a hilarious and welcome reminder that there is more than one way to become a legend — and no limit to what you can achieve when you have absolutely no idea what you’re doing.

“A hysterical comedy that will blow your mind” --RogerEbert.com

“A loving tribute to THE ROOM, its fans and filmmaking in general.” --The Guardian