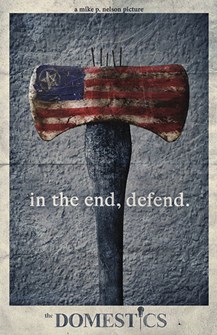 We’re kicking off Cinepocalypse 2018 with a thunderous bang in what will certainly be one of the most talked about genre films this year. It’s MAD MAX meets THE PURGE in THE DOMESTICS, an absolutely savage survival love story following a young couple (Tyler Hoechlin & Kate Bosworth) as they fight to return home through a post-apocalyptic mid-western wasteland ravaged by terrifying and sadistic gangs. From the legendary Orion Pictures, THE DOMESTICS is an action spectacle that boasts explosive set pieces and delivers nonstop action until the suspense-filled finale that will leave your jaw shattered on the floor. With his feature length debut, writer/director Mike P. Nelson establishes himself as a breakout filmmaker, weaving together incredible performances from Bosworth, Hoechlin, Sonoya Mizuno (Ex Machina), and Lance Reddick (John Wick), into an epic white-knuckled roller coaster ride of cult-classic bound badassery.

Join the Music Box Theatre, in conjunction with the World Premiere of THE DOMESTICS, for a very special Cinepocalypse Opening Night Celebration!

Join us for a special, complimentary DRINKING GAME SCREENING of the most excellent classic, BILL & TED'S EXCELLENT ADVENTURE!

Featuring killer original props from the brutal, gang-filled post-apocalyptic wasteland of THE DOMESTICS, this Opening Night Celebration is available to all ticket holders, and something you'll only find at Cinepocalypse! Be there or beware for this kickass party with the Music Box Theatre!

For more information CLICK HERE to visit our event page for THE DOMESTICS.