The Eyes of My Mother

The Eyes of My Mother 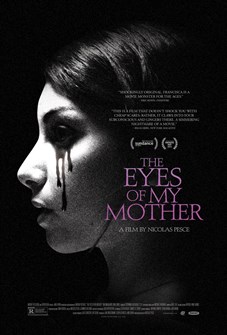 In their secluded farmhouse, a mother, formerly a surgeon in Portugal, teaches her daughter, Francisca, to understand anatomy and be unfazed by death. One afternoon, a mysterious visitor horrifyingly shatters the idyll of Francisca’s family life, deeply traumatizing the young girl, but also awakening some unique curiosities. Though she clings to her increasingly reticent father, Francisca’s loneliness and scarred nature converge years later when her longing to connect with the world around her takes on a distinctly dark form.

Shot in crisp black and white, the haunting, and at times disturbing, visual compositions of THE EYES OF MY MOTHER evoke its protagonist’s isolation and illuminate her deeply unbalanced worldview. Genre-inflected, but so strikingly unique as to defy categorization, writer/director Nicolas Pesce’s assured feature debut allows us only an elliptical presence in Francisca’s world, guiding our imaginations to follow her into peculiar, secret places.

"A simmering nightmare of a movie.” – New York Magazine

“A defiant announcement of a new talent. It contains some of the most memorable visual compositions in a very long time.” -RogerEbert.com