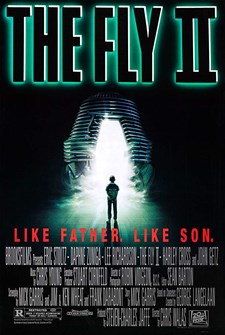 Dr. Seth Brundle is no more, but he has left behind a gruesome legacy: the teleportation device which transformed him into a human fly, and a son, Martin. Infected with his father's insect metabolism, Martin's growth is hugely accelerated, and he is soon a fully grown man (Eric Stoltz). When he discovers the remains of his father's experiment, Martin decides to pick up where Seth left off... Often forgotten in lieu of Cronenberg's initial outing, THE FLY II is a head-smashing, face-melting extravaganza that won't disappoint.