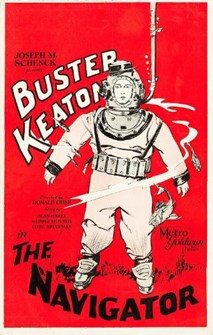 Brilliantly exemplifying Buster Keaton's ability to mine rich humor from the inanimate, THE NAVIGATOR is a classic of the Golden Age of Comedy, centered on and about a single extraordinary Rube Goldberg-esque prop: an immense five hundred-foot yacht. In a return to the "pampered youth" role he had played in The Saphead and Battling Butler, Keaton stars as Rollo Treadway, an inexperienced lad of extraordinary wealth -- and surprisingly little common sense -- who finds himself adrift on The Navigator with no one else on board excerpt an equally naive girl. After discovering each other's presence in an ingenious ballet of unintentional hide-and-seek, the couple resourcefully fashion a home for themselves aboard the derelict boat, in spite of their unfamiliarity with the tools of domesticity. They then embark on a series of misadventures on the ocean floor and upon the high seas, surrounded by a fleet of menacing cannibals, where the film reaches its explosively funny climax, with the aid of a crate of rocket flares.