The People Against O'Hara

The People Against O'Hara 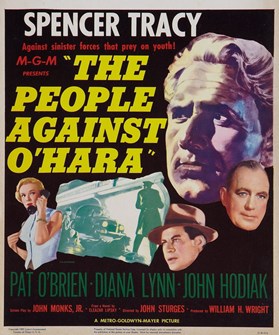 The great Spencer Tracy makes his only foray into film noir playing a retired New York attorney who returns to the courtroom to defend a young man accused of murder. The only thing that can blunt his brilliance is the bottle, which he can't let go of. The story's twists and turns lead to a satisfying, and surprisingly dark, resolution. Beautifully brought to life by a fine cast (Pat O'Brien, Diana Lynn, John Hodiak, Eduardo Ciannelli), and featuring the spectacular camerawork of John Alton.