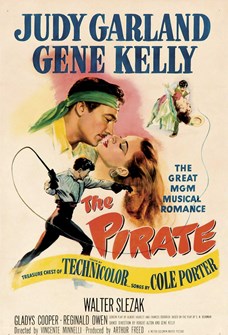 In celebration of its 10th anniversary, Cine-File Chicago, the online Guide to Independent and Underground Cinema, presents Vincente Minnelli’s classic 1948 musical THE PIRATE. Gene Kelly, in his most devilishly charming role, stars as Serafin, a traveling performer who may or may not also be the notorious pirate Mack “the Black” Macoco. Judy Garland is Manuela, a young woman who fantasizes about the romanticized exploits of Macoco. THE PIRATE features some of Kelly’s most athletic dance numbers; lush, eye-popping color and set design; and a roster of songs by Cole Porter at his most lyrically dexterous. An unrestrained masterpiece from the Golden Age of Hollywood and a comedymusical treat about the liberating power of art.